Hank arrived on Hilton Head late last night, after his marathon drive from the banks of the Illinois River.  I am holding forth on Salt Lick and in a standby mode to fly back if needed for manual labor and schlepping.

SO —- FOR NOW, I WISH TO “CATCH UP” WITH THE GREAT LOOP BLOG AND LEAVE THE ANGST OF MATTHEW ALONE FOR A MOMENT.

SATURDAY — OCTOBER 8, 2016      While Hurricane Matthew was “visiting” Hilton Head and the South East coastal areas we were cruising along the Illinois river.  This is a wide river, but very muddy.   Will be interesting to see what the BIG MUDDY looks like.  We note that this area of the river is lined with large grain silos – some very old and on down a way, others that are huge and more modern.  Grain  is the primary product being shipped.

We arrived in Henry, Illinois at a rather suspect dockage site – an abandoned OLD LOCK wall.

We do have a lot of crazy friends – who perhaps think we are a bit on the crazy side too!!  SO —– here they are, showing up in a four wheel auto versus that winged aircraft which is their usual mode of transportation….Hal and Sandy Shevers!!!   They made the drive from Cincinnati, OH to Henry, IL to meet up with us and have dinner.   What a fun evening we spent at the worst marina we have stayed in and the saddest little town ever!!  Dinner was at “Grandma’s” where I should have ordered the friend chicken instead of the catfish that was not catfish??   BUT — we didn’t care,,,,good friends, an adult beverage or two and all is right with the world.

The Shevers spent the night at the marina lodge where they were told they could find the key to their room near a sign!!     No bottle of wine or basket of fruit and cheese were in their room, but they said it was clean and just fine.

The early next morning found us on the river for almost 8 hours as we traveled with our buddy boat, Moondance, to Tall Timbers marina in Havana, IL.  We passed Peoria along the way where we tried to “see” if Bird of Prey was docked anywhere.   Did not site her.  We also saw two bald eagles along with several flocks of white pelicans.

We passed under US HWY #36 —- hello Rockville, Indiana and home of the infamous “36 Saloon”!

From Henry we cruised to Havana, IL , Tall Tiimbers Marina.  These few days are long cruising days – 70-80 miles – as we are attempting to make time.  Hank did spot several turtles up on a log catching some sun rays.   From Tall Timbers we had our first night of anchoring out since departing last April.   Moondance rafted up with us and burgers on the grill were enjoyed that evening by all, including Lilly the dog.   The next day, Tues. 10/11/16,  we arrived in Grafton, Illinois and are docked at Grafton Harbor Marina.   This is a good spot where we are at the end of the Illinois River and once we depart here and within less than 1/2 a mile we will be on the mighty MISSISSIPPI!!   Travel buddy boat is here and later on in the afternoon, Bird of Prey, with Steve and Vivian also arrived.   Wonderful fun to see them again since way back on the Hudson River.  All 6 of us enjoyed dinner at the Oyster Bar located here at the marina.  Yummy food….  The following evening the six of us, along with the crew (Rich and Tom) of Star Dust ( a sail boat) met again for dinner.   It was around this time of the day when the Salt Lick crew were trying to figure out what to do about Matthew aftermath at the office/warehouse.    Even so, the evening was good and we said our goodbyes to those that were departing the following morning.

OCTOBER 13, 2016   THURSDAY     After getting Hank sent off in the rental vehicle, I made a supply run and then went with the Sages to lunch at the “Old Bakery Beer Co.”. 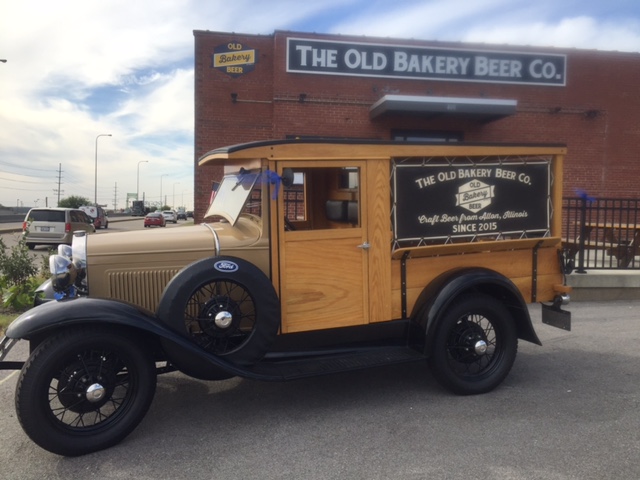 This was originally the Colonial Bread company bakery where the bread was made and shipped.  Now it is a fun medium sized micro-brewery and restaurant.  The lunch was very good,  As we were ready to leave, we realized we would be there for a while as there was a funeral procession down the main road. SO SO sad — this young officer,Blake Snyder, in St. Louis County which is just across the river from where we are, was shot in the line of duty when he made a domestic violence call.   He leaves a small 2 year old boy and his wife, along with his parents and other siblings.  HUNDREDS and I mean hundreds of motor cycles and police cars and vans and fire trucks and ambulances went by the restaurant.  There were blue ribbons everywhere, large flags suspended from cranes and buildings and many people standing along the funeral route to wave flags and pay respects.   He was being buried in Godfrey,IL, his home town.

THIS was quite emotional to observe.   This  useless death of one of our officials struck Mike, Deby and I deeply.   Our drive back to the marina was very quiet.   We waved and watched for an hour.   Police showed up from Chicago, Canada, all over Illinois and Missouri,,,,,,even from other states.  We heard that local DEA, FBI, ATF, etc. all volunteered to cover St. Louis County police department so that the officers could attend this funeral.   WHY oh WHY is there such chaos , anger and hate in this World???     God bless and keep safe his family and all those in uniform that serve us.

OK — I think y’all are with Salt Lick now at almost MILE ZERO – the end of the Illinois River and the beginning of the Mississippi!