Hey all, have missed reaching out to everyone.  So here goes with a little status update.

Hank — had a good week working in PA with a rep. followed by a busy week back on the Island doing personal business and seeing various medical gurus ( something that goes along with our age?? ), and also catching up with a few friends, but not all, as the days were filled, and now he is working in Dallas at a food show.

Janet – attended a women’s council meeting at IU, met up with Hank in PA for a couple of days, worked on personal business and also had those various MD visits while on HHI, now back on the boat in Baltimore awaiting the installation of a new holding tank for our waste system.   NO problems with it, it is just old and we felt a preventative approach was better than awaiting a failure of the system.   🙂    We have also had a couple of other small items taken care of while being here for the month.

Janet —- also doing the “happy dance” as the eye MD gave me the go ahead for scuba diving.   Not that this has any thing to do with the cruising blog, but it is great news to share.  Had missed playing the piano, so was happy to be back on the bench pounding on the key board while at home.

Boat chores have been on my “to-do” list for the past couple of days.   But today was declared an exploration day for me.   Off I went via UBER to Fort McHenry.  We cruised past this Fort coming here to the marina a couple of weeks ago.   This was the place  ( out in the harbor)  where Francis Scott Key penned the words to our National Anthem.   The years of War with England, the War of 1812, had progressed to the burning of Washington, our Capitol , by the British and their next city to take over was deemed to be Baltimore.

Francis Scott Key along with another gentleman had sailed out into the Chesapeake to meet the British fleet in order to request the release of one of the prisoners they had taken.  After dining and meeting with them, he did obtain the prisoner’s release, but he also had been made privy to the plans of the British to attack the city of Baltimore.!!!!    SO — what could they do, but hold him and his buddy captive on the ship, as it was getting ready to attack Baltimore.

WHAT IS most interesting, is that this meeting/negotiation took place either on or near the shores of Tangier Isalnd.   We learned that the local minister there had a prayer service for the British prior to the battle, but he also predicted that they would be defeated as they attempted to capture Baltimore!!!!!   How prophetic.

The visit to Fort McHenry was very interesting.  All museums have the obligatory “movie” – at the end of this one, our National Anthem was beginning to be played.  Out troops one of the park rangers, who stands in front of the screen, facing it, and salutes.!!   By this time we were all standing with hands over our hearts………at the end of the song, UP goes the movie screen to reveal this huge glass window thru which we could see the Stars and Stripes on the flag pole at the exact same spot  where it was during this battle of Baltimore!!     Oh yeah, heart beating fast, a lump in my throat and tears in my eyes.   WOW

Once these words were published and put to music, the song spread within 6 weeks to all 15 States from Mass. to Georgia.  It was not officially our National Anthem until sometime in the 1930’s.

I later went to Fells Point and enjoyed raw oysters and a vodka.  I then took a water taxi to the Inner Harbor and from there UBER back to the marina.   A wonderful day, even tho’ it rained.   ( rain jacket and umbrella NOT  with me — costly plastic poncho saved the day)

Tomorrow I will meet up with long time friends who live a couple of hours away from here.  They plan to move to the NorthWest soon, so I am so happy we are getting together.  It has been over 20 years since we last saw each other.

DO YOU KNOW WHY THAT FLAG WAS CALLED THE “STAR SPANGLED BANNER”??              It had 15 stars and 15 stripes of alternating red and white.   At that time there were 15 States in our Union.  The “stars” were ” spangled ”  due to the fact that on the flag they are all tilted and at an angle.  Something to keep in mind for your next trivia game. 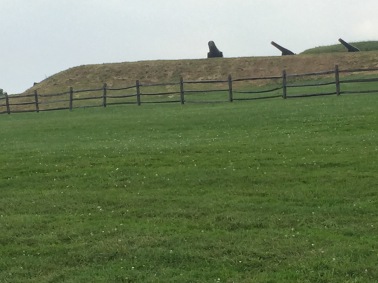 the above posted for Pam L. and the Harters……I liked the Lucky Lime oysters the best.

This last photo was taken by Hank, here at our marina, which we both agreed had the LOOK of what Francis Scott Key had seen – well sorta – like minus the tall buildings and that water tower.   ha 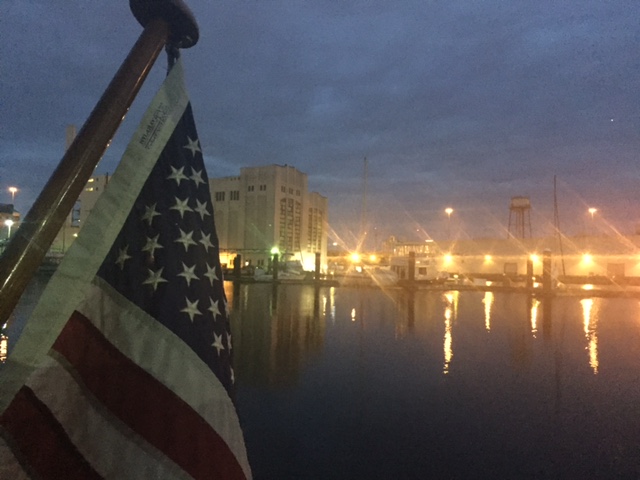